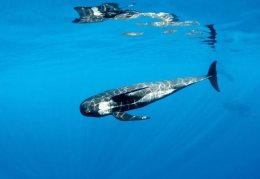 Mammals - Dolphins and Pilot Whales by Jamie Watts, Photo by Mark Koekemoer, The Underwater Camera Company
On the signal from the skipper, two snorkelers slid as smoothly as humans can into the water. With deep, rich blue below and in every direction, the only reference becomes the light dancing through from the surface. But the second they entered the water, they could hear and feel themselves being scrutinized – instantly the focus of unseen attention. Creaks like an unoiled hinge, rising and falling streams of clicks, musical whistles and barks filled the water. They could feel themselves being read – acoustically scanned right through their bodies, vibrating the airspaces in their chests.


Keeping their breathing rhythm slow, last minute checks of the cameras, in for three, out for five, shoulders and legs loose, in deep, out for seven, the clicks and whistles intensifying and increasing in pitch, until most of them could no longer be heard – just felt. Then a last breath, a smooth push forward and, as smooth as can be mustered, head and chest down, one leg high, then a few slow kicks down a few metres. In spite of the relaxation techniques, the heart thumps as silhouettes appear – a tight cluster passing by a little off to the left, buzzing the snorkelers, then slowing as their trajectory approached its nearest point. Two young whales, the size of bottlenose dolphins, peeled off for a closer look, monitored by the large bull escort swimming just off to the side, deeper and closer to the snorkelers. Once within a couple of metres the youngsters’ eyes come into play, adding a splash of texture to the 3D acoustic picture their brains have already built up.


For the last three years, Steve and Mark have taken small groups of snorkelers to film pilot whales off Gibraltar. This has been by no means a simple task – approaching large, mobile, acoustically-sensitive predators in a sensitive and informed way in a major shipping lane. The keys to their success have been their experienced local skipper, consulting with local and international specialists and government, and by tightly-controlled, small groups.


Pilots are not really like anything else in the sea, in spite of superficial similarities to their close relatives. How do you characterise pilot whales? By comparison with their better-known, larger and more heavily-built cousins, the charismatic orcas? Or perhaps by comparison with the other dolphins. What about sperm whales or bottlenose whales, with whom they share some of their diving habits and prey preferences?


There are two almost indistinguishable species of pilot whale. ‘Pilot’ comes from the habit of large extended family pods to follow a lead navigator – sometimes following the leader into trouble or even to their deaths. We should call them ‘pilot dolphins’, technically they are very large dolphins, but they are just about big enough – large bulls may exceed three tonnes - that ‘whale’ has stuck. They are also known as ‘blackfish’, despite being brown – and definitely not being fish.


Humans rarely encounter them, yet they are, on the global ecological scale, probably the most successful of all dolphins, and far more abundant than any other giant predator. There are probably around 1,500,000 pilots on earth, and they average well over a tonne of warm-blooded, energy-hungry marine mammal. This makes them quite an ecological force. Around the rich waters of the UK, Faeroes, Norway and Iceland, for example, pilots probably consume more marine resources than all the seals, all the seabirds and most of the other dolphins combined – and very nearly as many as the greatest predatory consumer of these marine resources - humans.


In most of the world, though, we only seem to see them inshore when mass strandings occur – pilots seem to suffer from mass strandings far more than other whales and dolphins. A combination of strong bonds among the large, tight, matriarch-led social groups, and confusion of the sound-based navigation systems of groups of pilot whales swimming in confined, shallow water is probably to blame. Pilots’ world is dominated by sound – and they like wide open spaces. In recent years the shallow-water world has been complicated by increasing acoustic noise from shipping, oil and gas exploration. The bioaccumulation of toxins and the insidious weakening of immune and nervous systems, common to many large, long-lived predators have also been implicated as contributors to confusion and to strandings.


Generally, then, open, deep water suits pilot dolphins better than shallows, which is why humans don’t often encounter healthy pilots. But there are a few places, like Gibraltar and the Canaries, where deep water, and the pilots’ food, comes close enough to shore for humans and pilots to more regularly come across each other.


The two species of pilot whale have some overlap; between Biscay and north Africa, and in the Humboldt current area off Chile and Peru, both species can occur, but generally they are separate. The temperate-water long-finned pilot whale in the north Atlantic and around the southern hemisphere, the warmer-water short-finned pilot whale in warmer seas around the world. You need to be in the water to see the only obvious physical difference between the two is in the length of the swept-back pectoral fins (the ‘arms’), which are strangely elongated in the cool-water species. There are more subtle differences in the colour patterns, but these seem to vary between individuals often more than between the species.


Form follows function, and there are a couple of things about pilot whales that point to them being a little different to other dolphins. Heavy-set dolphins, like the bottlenose or the ultimate stocky bruiser – the orca, are muscular sprinters, living near-surface, the majority of them tied largely to cool waters rich enough to feed their massively energy-hungry bodies. More slender tropical dolphins like the spinners or spotted dolphins cruise steadily between the few food hotspots in far sparser seas, foraging effectively over wide areas at a somewhat lower ‘power setting’.


Pilot whales cover both of these areas – the longfins in the cool, productive seas and the shortfins in warmer water. They are somewhat long-tailed, and rather short-snouted, a little like a handful of their close relatives, including the Risso’s dolphin, the pseudorca, the pygmy orca and the melon-headed whale.


But pilots are built rather differently from even their cousins. There’s the short, thick forebody with the strangely swept-back pectoral fins, and the bizarre, long-based dorsal fin, set further forward than that of any other dolphin. Pilots also exhibit a more extreme physical male:female difference (sexual dimorphism) than any other dolphin. Then there’s that huge bulbous forehead melon, overhanging the short beak. Old males develop the melon to an extent not seen in other dolphins, but seen in the distantly-related belugas, bottlenose and sperm whales – all deep divers, for whom acoustics become vital for communication and hunting.


The short snout, with the few, robust teeth at the end of the thick, triangular jaw, are specializations for grabbing large squid and cuttlefishes. This is one of earth’s most abundant food sources – if you can get to it. Squid and cuttlefish are superbly efficient producers of protein, and exist in vast numbers in rich seas. However, they can be elusive, constantly on the move, and many of them spend much of their time in deep, oxygen-depleted seas where large predatory fish can’t extract enough oxygen to keep their muscles active. To be able to use this resource, a predator needs to spend time at the edge of continental shelves, close to deep water – and needs to be able to dive deep and bring oxygen with it, like a handful of marine mammals can. It can be rather a good way to live if you can manage it – sperm whales are by far the most abundant large whale and pilot whales the most successful dolphin.


Ultra deep divers, like the sperm whale and many of the beaked whales, tend to have a handful of ‘design features’. They have somewhat tube-shaped bodies for low drag and normally rather large tail flukes, allowing the minimum number of slow tail strokes for relaxed diving. They tend to do most things slowly – it makes sense, if you need to hold your breath for an hour or so for long, deep dives to be as physiologically relaxed as possible. Deep diving specialists have huge rounded foreheads, housing oversized – and loud as well as rather powerful – acoustical apparatus for both navigation and communication in the lightless depths.


Pilot whales can indeed dive rather deep for a dolphin. Their well-developed melon, particularly in old males, hints at a highly-evolved echolocation suited to this life, and indeed as Steve and others have found, the creaks, whistles and clicks of pilots are rather loud and powerful. The body shape of pilot whales is, like other deep divers, somewhat tube-like, accentuated by the exaggerated tail keel on the long tail, particularly in old males.


But the sleeker, more muscular hind-body of a pilot whale is just too athletic for it to be an ultra-diver, and they are not quite as locked-in to this slow lifestyle as sperm whales or bottlenose whales. Pilots have proportionately small tail flukes, and the reinforced keel transmits an awful lot of power from oxygen-hungry muscle to that tiny tail. That is built for sustained bursts of rather high speed. Pilots have been recorded chasing down prey fast at depth, and they have been described as ‘the cheetahs of the sea’. No other deep diver we know of moves fast – the oxygen demands of speed are just too high. The payoff is a lower depth and time range – pilots probably can’t get deeper than a kilometer – amazing for a dolphin but not in the same league as sperm whales.


So they seem to be a hybrid design – the undersea decathlete. Pilots are built pretty well for deep diving as well as for speed and endurance – they stand their own in the same worlds as the cruising tropical dolphins, the robust cool-water orcas and other dolphins and the sperm whales. Their compromise design helps them exist rather successfully in all these worlds.


The pilot whales around Gibraltar have been suggested to be waiting, along with orcas and great white sharks, for the giant bluefin tuna that head into the Med to spawn each year. It would surprise me if even pilot whales would take on adult bluefin tuna on a regular basis, although it’s a bit of a moot point - thanks to massive overfishing this food source has largely disappeared and will not be available much longer.

Despite their occasionally rather ‘challenging’ behaviour, as seen by a few snorkelers (Steve and his team have occasionally seen mid-water tail-slaps, bubble bursts and fast, close passes, and on a couple of occasions snorkelers have been scared by pilots dragging them down a few metres then letting them go) I get the feeling pilots are not often predators of really large animals, or as pugilistic as orcas or perhaps some other large dolphins like bottlenose dolphins or pseudorcas. I suspect these interactions are more about holding their ground than as any particular indicators of a superpredator – their normal prey are probably less than a metre long. Pilots share some of their territory with the more predatory orcas and pseudorcas, not to mention great white sharks – they need to be able to hold their ground in the face of interest from these other large beasts. And interest from another ocean predator - anything as clumsy and pathetic in the water as a human that twitches, thrashes, splashes and has an unnaturally high heartbeat, while clumsily yet confidently charging towards you pointing strange flashing boxes at you - must be rather disconcerting.
Next
Previous